Well, you will be happy to know that OnePlus has upgraded its Screen Recorder and now providing every feature that you may need while recording the screen.

The screen recorder is available as a quick settings tile in the notification shade. Just tap on that to open the screen recording controls pill at the bottom of the display. You can also drag it anywhere around the screen. You’ll see the record and settings button on the pill. On tapping settings, you can adjust resolution, bit rate and audio source. There’s also an option to pause the recording via a screen overlay.

The main highlight of the new screen recorder is it allows you to capture internal audio from the app and external audio through the microphone simultaneously. However, currently, we could only choose between the internal audio and microphone audio options as shown in the screenshot. 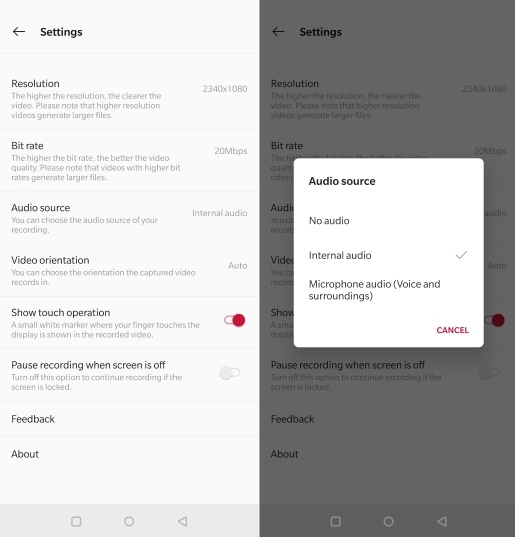 People have also tested the feature, but non of the two aforementioned audio sources have recorded both audios while playing the PUBG Mobile. It’s because they are probably running pre-production software. The company is expected to release the update in the upcoming weeks to deliver this useful screen recording feature in the screen recorder.

Talking about some other features, the OxygenOS 9.5 comes with Fnatic mode to provide a distraction-free gaming experience, Zen Mode to curb smartphone addiction, spam call and text filtering especially for India, Work-Life Balance and more.

The new OS has debuted in the latest OnePlus 7 Pro launched with gorgeous design and insane specifications. It sports a new 90Hz QHD+ display, dubbed as Fluid AMOLED. The OnePlus 7 Pro is powered by Snapdragon 855 and coupled with 6/8/12GB. OnePlus 7 will come in three variants with 128GB or 256GB UFS 3.0 internal storage.

Also Read: 4 Reasons Why You Should Not Buy Foldable Smartphones in 2019

Coming to cameras, the OnePlus 7 Pro brings a triple rear camera with a 48MP Sony IMX 586 sensor, an 8MP telephoto lens, and a 16MP ultra-wide lens with a 117-degree field of view. On the front, there’s one pop-up selfie camera, with a 16MP sensor. The pricing starts at Rs. 48,999 for the basic variant.

So, what do you think about the new screen recording feature? Let us know in the comments below.